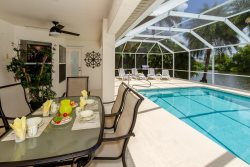 A Visit to Manatee Park in Fort Myers

Manatee Park Ft. Myers is a fantastic place to see manatees in the wild! During the winter there are sometimes up to 100  manatees to be seen. Located just outside the city, the park is on the Orange River, a small stream that branches off the Caloosahatchee River, near the Florida Power and Light plant.

Manatee Park is open year round, but to see these gentle creatures, you need to come during the cooler months of November – March when they are searching for warmer waters.

There are 3 covered observation areas along the river with seating and telescopes. The observation areas are connected by a pathway lined with native plants and beautiful butterfly gardens, it’s another lovely place for watching manatees. A playground, tiki hut rentals for parties, picnic shelters, gift shop, and a visitors center are available. You can also take a walk on nature paths that wind through gardens, the park, or rent kayaks and fish from the fishing pier on the Orange River.

Volunteer naturalists give talks during season once or twice a day. The program is free, for all ages, and is about what manatees eat, where they live, and the challenges they face.

The Florida manatee, is a large aquatic relative of the elephant. They are grayish brown in color and have a thick, wrinkled skin on which there is often growth of algae. Their front flippers help them steer, or sometimes crawl, through shallow water. They also have powerful, flat tails that help propel them through the water, Despite their small eyes and lack of outer ears, manatees are thought to see and hear quite well. Like other grazing animals, Florida manatees play an important role in influencing the plant growth in the shallow rivers, bays, estuaries, canals and coastal waters they call home. 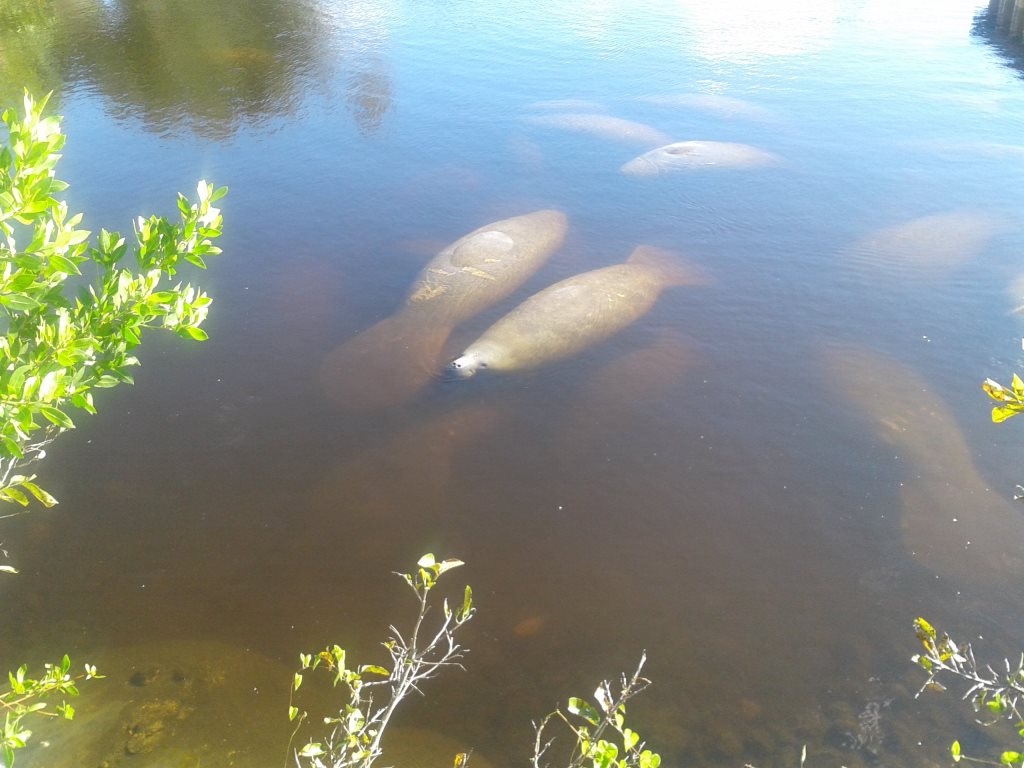 Manatees only have molars, which are used to grind food. As they wear down and fall out, they are replaced with new teeth. The gentle giants are herbivores, with a diet consisting mostly of sea grasses and freshwater vegetation.

Although there is no precise census of Florida manatees, today’s population is estimated at approximately 5,000 individuals. 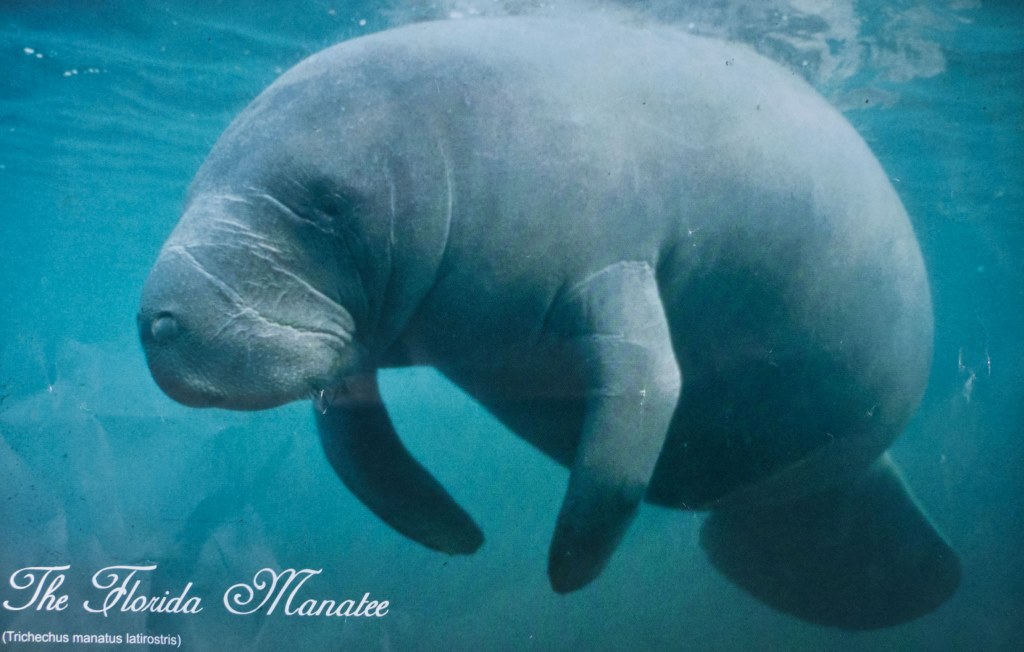 Manatees can be found in the warm waters of shallow rivers, bays, estuaries and coastal waters. Rarely do individuals venture into waters below 68 degrees Fahrenheit.
Manatees take up residence primarily in Florida’s coastal waters during winter. Some individuals migrate as far north as the Carolinas or as far west as Louisiana in summer. Manatees have swum as far north as Cape Cod, Massachusetts in recent years. 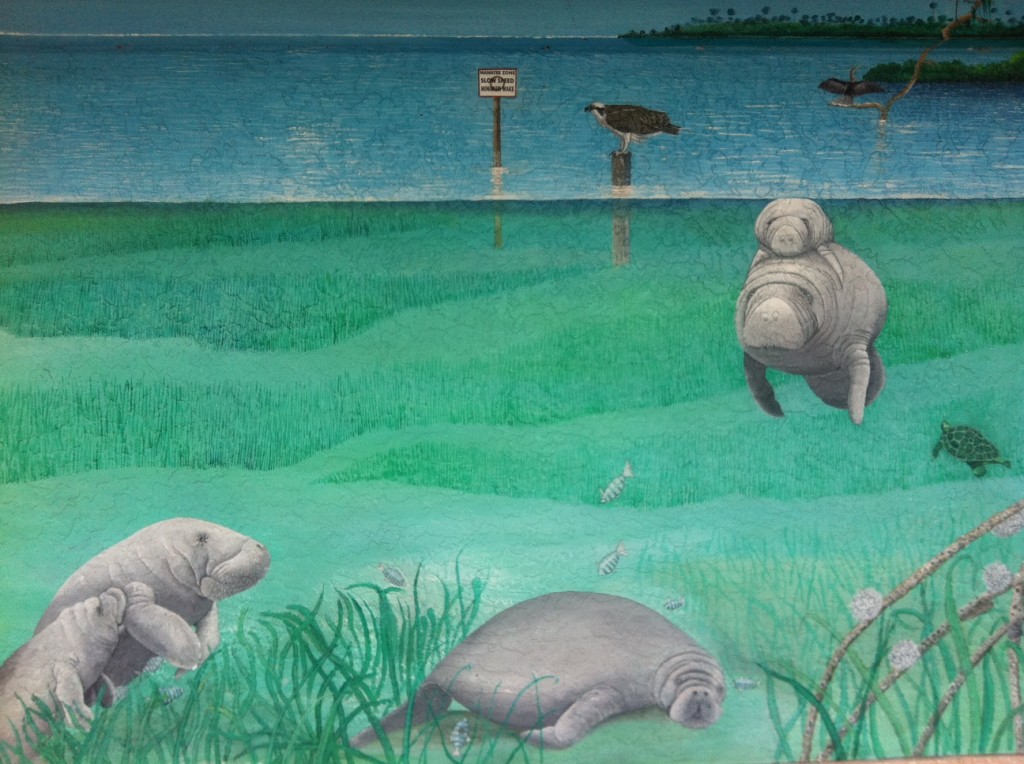 Manatees only breathe through their nostrils, since while they are underwater their mouths are occupied with eating. A manatee’s lungs are 2/3 the length of its body.

Well known for their gentle, slow-moving nature, manatees have also been known to body surf or barrel roll when playing. They normally rest and feed often. Manatees communicate by squealing under water to demonstrate fear, stress or excitement.

Calves are born weighing between 60 and 70 pounds and measuring about 3-4 feet long. They nurse underwater.

As Florida’s human population increases and waterfront development continues, manatees are loosing the habitants they rely on to survive. Development can damage sea grasses (manatees main food resource), degrade water quality and reduce the availability of warm water from natural springs that provide manatees shelter during periods of cold weather. At temperatures below 68 Fahrenheit, the stress of the cold can become dangerous, or even fatal to manatees.

Residential and commercial  development has reduced the number of natural warm springs that manatees once used to stay warm during the winter. Now, most manatees rely on the warm water outfall that power plants produce. Power boats and pollution are other threads to the manatee population. Numerous animals are injured and killed each year. The survival of Florida’s manatees will depend on protecting the natural warm springs that they rely on, and ensuring that they can enjoy those places safely.

Jump to a Rental